The thug niggas have arrived and its judgement day 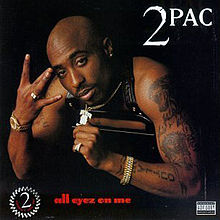 The track starts with a silent moment. By this point, I’m in a groove. I’ve exorcised any morning blahs and all concerns about work and home are in hibernation. The only things on my mind are the route and my breathing. The peerless George Clinton  breaks the silence with an intro that always sounded like a subliminal aimed at Dr. Dre and the g-funk era (for this to work, you’d have to believe that the “million pairs of eyes” belonged to Dre, Quik and the g-funk producers of the 90s “who will never see… the P!”). Tupac obliterates the track with a blend of bravado and rage. It’s post-prison hyperbole that helps me maintain that M.O.P. and Freeway fueled momentum and makes me nostalgic for that moment when Death Row felt like an unbeatable dynasty.

Running Mix 1: The Devil’s In Him Lord, Open His Eyes

Running Mix 3: When Will Queens Realize That the Flow Don’t Stop?