This is the second part of a three part series of posts on Avengers: Endgame. Check out part one here and part three here.

One of the most interesting things about Endgame is the way the film uses time to tell its story. We are used to seeing time treated as a plot device or a stream of events and plot points in superhero fiction, but Endgame goes a step further by considering the relationship that the characters have with time and the impact that time has on their lives. Time plays a central role in the plot and theme of the film and its’ impact can even be seen in the images used to tell the story. Time serves as a limiting principle on the fantastical logic that we often see in superhero films – even in a world with time travel, the harm caused by Josh Brolin’s Thanos (the villain who destroyed half of the universe with a snap of his fingers in the original film) created half a decade’s worth of scars that cannot be erased (at least for now).

We don’t really see time move forward or impact the lives of prominent characters in the superhero comics published by Marvel or DC for a number of creative and commercial reasons, such as the need to preserve the mythic, permanent feel of important characters in a superhero universe and the perceived cost of allowing valuable characters age and die (in a lasting way). The ‘essential’ Iron Man in the comics is a brilliant and wealthy playboy inventor with a suit of armor. We’ve seen his status quo change a number of times over the years – he has been replaced by his best friend and Dr. Doom and a teenage girl and served as the Secretary of Defense and the Director of SHIELD. We’ve also seen depictions of him shift over the years – in some comics he feels like a brash young man, while in others he feels more like a mogul in late middle age – but in the end, he is always returned to his role as a youngish playboy inventor. 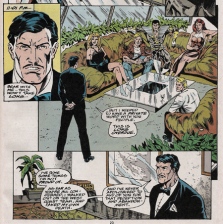 It’s harder to take a fluid approach to a superhero’s appearance when the superhero is an actor in a costume, even when the director has the latest in visual effects at their disposal. A fifty four year old Robert Downey jr. can’t pivot from a middle aged mogul to a young master of the universe. In the months before the release of Endgame, some speculated about Marvel’s long term plans, as many of the contracts binding key actors to the studio were set to expire and talent seemed eager to explore acting opportunities in other genres. Would Disney recast Steve Rogers and Tony Stark or put different characters in the role of Iron Man and Captain America? We’ve seen Warner Media follow the first path in its Batman and Superman franchises over the decades to great success, but they don’t ask viewers to treat all of the films as part of a single cinematic universe (although there is something fun about the notion of a Batverse style project with Michael Keaton, George Clooney, Val Kilmer, Christian Bale and Ben Affleck). A live action film franchise designed to mimic the vast narrative storytelling approach of superhero comics will eventually have to confront the chief dilemma of superhero comics – how to tell high stakes interconnected stories over lengthy periods of time without changing any of the core (and most lucrative) elements of the status quo. The studio has to reward long-term hyper-committed viewers while maintaining accessibility for more casual audiences.

Endgame resolves this dilemma by telling a story about trauma and aging disguised as an epic adventure. We see this in the images that are used to tell the story and the plot of the film itself. The heroes look old and exhausted in a way that is hard to effectively communicate in comics drawn by a number of artists with slightly different approaches to character faces.

The Russo Brothers frequently use state of the art visual effects in Endgame’s action scenes and in sequences that spotlight a character’s use of their superpowers, but they refrain from using technology to obscure how the actors playing the characters have aged over the last decade. The camera appreciates the impact that time has had on the appearance of actors like Robert Downey Jr. He is weathered and slightly gaunt, but vital. When we see him after his return from space or are introduced to his newly expanded family, it’s clear how much he’s changed since we first saw him as Tony Stark over a decade ago.

The film’s interest in the ways that it’s characters can change and evolve with the passage of time extends to its plot. The story centers around a Tony Stark and Steve Rogers who are ready to retire and move on to a post-combat phase of their lives and a Thor who is grappling with the cumulative impact of personal loss and professional failure. We also see how other characters have changed over the years, from a Bruce Banner who has learned to manage his anger and a Natasha Romanov who has become the leader of the Avengers, to a Hawkeye who has become a remorseless vigilante and a Rocket Raccoon who has become a de facto team member. We’ve seen stories where prominent characters evolve, age, and are affected by their past in lasting ways, but most feature alternate versions of the characters from another universe, or are about secondary characters, or contain signals to fans that all changes are temporary. There are stories where Tony Stark retires, even ones where he dies and/or is replaced by his best friend, a teenage girl and Victor von Doom, but none (other than stories set in another universe) where he spends five years of his life as a husband and father in (semi?) retirement. The last few decades has featured a number of stories about intelligent versions of the Hulk, but none where he was truly happy and emotionally balanced 1.

I have read stories where Thor is a frog, where he believes that he is unworthy to hold his mystic hammer Mjolnir, ones where he is a young god fighting alongside Vikings and ones where he is the All Father at the end of time, but none where tragedy slaked his thirst for adventure. I’ve seen Captain America retire (and age) on multiple occasions, but I’ve never read a story in which he put the shield down because he was ready to retire, to be a symbol for the last stage of a soldier’s journey.

The heroes experience five years between the introduction of the movie and the beginning of the action in the first act, and the passage of time has made them feel more human, even ordinary. Those of us who were introduced to the characters in comic books are used to seeing the heroes face changing circumstances, but rarely see them grow in response to those shifts the way people typically do over time, especially when that change runs counter to the demands of the companies that own these characters and the marketplace. The version of the Hulk that we see in the comics in 2019 is different from the Hulk that rampaged through the comics of my childhood, but he’s still a ferocious giant doing battle with monsters, not the stable behemoth we see sipping coffee and explaining time travel (poorly) in Endgame 2.

1. An Aside About the Hulk.  The closest that comics readers have come to seeing this version of the Hulk was in Peter David and Dale Keown’s version of the Hulk from the early 1990’s or Mark Bagley and Gerry Duggan’s version from 2015. David and Keown’s Banner worked with a therapist to merge his (then) three personalities into an integrated whole, but the Hulk that resulted was a man who was trying to find peace and emotional balance (and was unable to achieve his goal). Bagley and Duggan’s Hulk was extremely intelligent, but he was actively suppressing the Banner side of his personality (and more importantly, was driven by hate). The stories that feature both of these versions of the Hulk strongly suggest that he may evolve into the Maestro, a future version of the Hulk who has become a villainous despot.↩

2. An Aside About Time Travel. Time travel is used in the film as a tool to revisit and learn from the past, not to rewrite it (unless your name is Captain America). It may be overly complicated and nearly incoherent as a plot element, but it does serve as an effective reminder of all of the past events that shaped the lives of some of the central characters. We see the experiences that cemented the Avengers team and traumatized Iron Man. We are reminded of how Thor was shaped by the losses he endured in Dark World (and while this was not intentional, one could almost see the lighter tone (and high stakes) of Ragnarok as a response to his traumatic experiences in the prior film). We also visit moments of the past that give us some new insights into familiar characters like the Guardians of the Galaxy’s Gamora (Zoe Saldana) and Nebula (Karen Gillen)’s Nebula or John Slattery’s Howard Stark. We even get a semi-coherent explanation of time travel in the Marvel Universe from Tilda Swinton’s Ancient One.↩