I started thinking about turning forty a few months ago, mostly because people started to ask me about it on a semi-regular basis. I was told that it was a meaningful milestone and an ordinary day, that I would feel unchanged and newly mortal, and that I would reflect on my past and think about the future. I was urged to do something fun, novel and extraordinary.

I spent a happy thirty minutes talking about travel with my brother, who is one of those people who always makes sure to do something interesting for his birthday. He was the one responsible for my last big birthday trip to Las Vegas about eleven years ago. 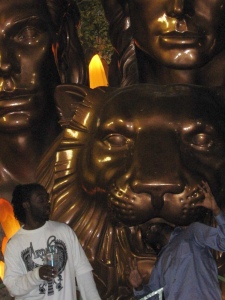 That was a different version of me, a much younger Jamaal with locs who smoked cigarettes. 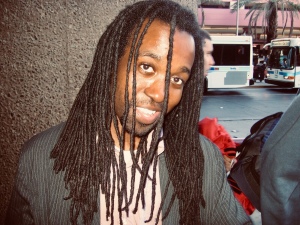 That version of Jamaal wasn’t quite sad, but very far from happy. He was starting to have trouble imagining his future. Things turned out pretty well. He found a new job (and was laid off, but quickly found another and was later promoted into one that was a perfect fit). He proposed to his long-term girlfriend and the two were married three years after the Vegas trip. Six years after Vegas, he welcomed his son into the world and learned what it was like to feel overwhelmingly happy and terrified on a daily basis. It didn’t take much effort to imagine the future anymore.

I also started thinking about turning forty because I mentioned it to people on a semi-regular basis and was hoping to find a way to figure out how I should feel about it. November is a very busy month in the life of the Thomas family, between my son’s birthday, a wedding anniversary and the tumult of Thanksgiving, and it’s extremely easy to distract myself by attending to the needs of others. I didn’t plan my son’s party this year (my wife was the mastermind of that one), but I did take every opportunity to bury myself in work and routine and story reading and writing practice and chores and games of Tayo the Friendly Bus.

Whenever I did find time to think about my fortieth birthday, I felt a sense of joy and peace. I haven’t come close to accomplishing what I thought I would’ve done in terms of my career, but my life outside of work is far more fulfilling than I ever would have imagined. That feeling dissipated when I thought about doing something for my birthday. It made me feel uncomfortable, like I haven’t done enough in my life to merit a celebration. I don’t actually believe that, but there are definitely moments when I compare who I am to who I could have been, and feel like I’ve fallen short of my potential.

So I didn’t jump out of a plane or throw a big party or go on a fun adventure. Maybe I should have. I just took a day off from work, took a walk, listened to a great talk from a journalist who covered some of the most terrifying conflicts of the last three decades and did some writing. I saw a little bit of the Criterion Edition of Terrence Malick’s New World and had lunch with my wife. I plan to see some old friends this weekend. I would like to say that I felt like I did enough, but I’m still uncertain. I genuinely believed that I would reflect on my past and plan for my future, but it felt more like I found ways to distract myself. I still have some time (hopefully!) to figure out how I feel about turning forty.

A few things I do know – I’m an older Jamaal who cut his locs (and is slowly losing his hair), who stopped smoking over a decade ago, has a pretty great wife and kid, and who’s not always happy, but pretty far from sad. As of yesterday, I’ve lived in this world for four decades. I’ve had a lot of love in my life (I’m lucky). I’ve spent the vast majority of my career helping people and organizations (who are in the business of helping people). It may not be a lot, but it feels like something.

There are other personal and work related things that I won’t share (your boy’s got plans), but this is a start.

The Carter: Weezy Never Takes A Day Off