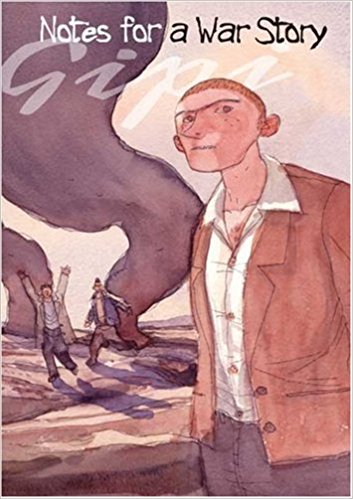 Notes of a War Story, produced by Gipi, and translated by Spectrum. Notes is published by First Second Publishing, an imprint of Roaring Brook Press, and was originally published as Appunti per una storia di guerra in 2004 by Coconino Press.

Gipi doesn’t tell the kinds of stories that I’m used to reading in comic books. I grew up on Marvel and DC comics, so I tend to enjoy comics that convey meaning through plot. My earliest comics are filled with dialogue and exposition that clearly explains the plot to the reader. Comics that always tell you exactly what they mean. Although many of today’s ‘mainstream’ books are more sophisticated, most are complicated (or convoluted), not complex. Gipi takes a different approach. I first became familiar with Gipi when I read Garage Band for the tenth episode of the Funnybook Babylon podcast. In Garage Band, Gipi uses ordinary moments to provide insight into the interior lives of the characters and establish a mood that made the plot feel unimportant.

Notes of a War Story is ostensibly the story of a group of friends coming of age in the midst of an unnamed European war taking place in an anonymous Balkan nation. The lack of specificity, in time or place, gives the book a allegorical, dream-like quality. The group of three boys embody some familiar archetypes: the sycophant (Christian), the overly aggressive proto-criminal (Stefano, the “Little Killer”), and the bourgeoisie wayward one (Giuliano), who is our protagonist. The first two are representative of the lower class, both poor, one subjected to emotional (and probably physical) abuse. The third stands for the middle class. He’s the one who grows up with a lawn and a bed. The crazy one is the leader (aren’t they always?), which sets in motion a series of events that culminate in a set of life changing choices for all three.

I didn’t read the dialogue in this book until my second read. I was too busy falling in love with the images and Gipi’s visual storytelling. Gipi’s work is deceptively simple, using relatively few strokes to create distinct and expressive characters.

Notes tells several stories simultaneously. The narrative closest to the surface is about  young men getting involved in a situation that they can’t handle. But this is also a tale about the impact of war on the lives of those who are simply trying to survive in its midst. Gipi shows us a society divided between predators and prey. The people shown in Notes are either the gangs preying upon the cities, the anonymous hustlers thriving on the collapse of the social order, or those who are conspicuous by their absence. After completing Notes, it also seems that there is a narrative lurking in the background that Gipi refuses to tell, opting to only express it through oblique references. One imagines that for an artist less concerned with the fate of wasted youth, the focus of Notes could easily have been Felix, the minor gang boss that acts as a mentor to the three youths. But that is one of Gipi’s strengths. He refuses to tell every aspect of the story, to fill in all of the blanks for the reader.

The war changes the characters, and provides an opportunity for transformation. For Giuliano, the war provides an excuse for him to abandon his life. His village is severely damaged by the war, and now he is living in a world that he had only experienced through computer games. The question he faces is whether he has the skills to survive in this new world. However, for almost everyone else, the war reveals their true selves. Little Killer starts off as a kid who is trouble, the kind who starts fights, and gets suspended from school.

One envisions Stefano as the type who is both charismatic and psychotic enough to be a gang leader. But the story reveals Stefano’s hidden nature, his need for guidance, as he becomes, in the end, a willing flunky for Felix. Although Stefano and Giuliano view the other as a polar opposite, Christian is really the antithesis of both. He has neither the options of Giuliano, nor the will of Stefano, and in many ways, his story is the most tragic in this tale. He represents the masses who see conflict as an opportunity to rise above their station, without fully understanding the sacrifices that are necessary to do so. He is the true innocent of this tale, lacking the viciousness of Stefano or the self-awareness of Giuliano.

In the end, Notes is a morality play that centers around three choices that need to be made in the midst of a crumbling society. Should you bind yourself to the old society or ally yourself with the new? Will you ally yourself with the predators or the prey? Should you remain passive or take an active role in the conflict? The first two questions offer the possibility, however slim, that you can change your mind, or at the very least, pretend that no choice was made. Once you are in the front lines of a conflict, there is no turning back.

Giuliano seems to be the only character that sees this. Haunted by nightmares of his friends, who mock him for his status, and by memories of a life unmarked by tragedy, he knows that the choices that he makes limit his future options. For his friends, those limited options are the only ones that they see. In the afterword, Alexis Siegel notes the significance of the dreams in which Stefano and Christian are headless and interchangeable. Siegel links the dreams to Giuliano’s refusal to “stop thinking for himself” as well as his potential for introspection, something that the other two lack. I think it signifies their absence, that on some level, they embraced their fate the moment they left San Donato. Note that in the dream sequence, nothing was left of the two but their clothes and indistinct hands. In some ways, they were already ghosts to him.

Notes for a War Story is currently available in both comic book stores and book stores, and all images are copyright by Gipi.