Hey y’all. When I originally wrote this, I had just read a great article by George Packer about Rick Perlstein’s Nixonland and was reminded of how much our 37th President shaped the decade before I was born and the America we all live in today. I decided to re-read the book (originally read it in 2008 concurrent with Jason Lutes’ Berlin: City of Stones because I enjoy light and cheery reading!). I was also reading Rick Remender’s Captain America. I was fascinated by the relationship between the New Deal inspired fantasy that Captain America represented and the modern conservative vision of the American dream. On the surface, there’s a vast gulf between Steve Rogers and Dick Nixon, but in reality, the New Deal was only for some people and there were a hell of a lot of guys like Steve Rogers (vets and New Deal liberals) who went for Nixon.

A Nixonland Cap could help us grapple with our collective demons more effectively than Nick Spencer’s Hydra Cap, whose beliefs are extreme and foreign in a way that allows us to distance ourselves from the darker elements of the American psyche.

Okay, it probably wouldn’t do any of those things. But it might be fun.

Also – for some reason, I confused Rick Remender with Jason Aaron in the original post. The former is the one who worked on the book a couple of years ago. The latter is a writer who probably should write a Captain America book one of these days, but has only tackled the character in an underwhelming miniseries in Marvel’s defunct Ultimate line. Remender and Carlos Pacheco came up with Dr. Mindbubble, a scientist affiliated with the Weapon Minus program who injected himself with a mix of the supersoldier serum and LSD to become a supersoldier for the psychedelic era. 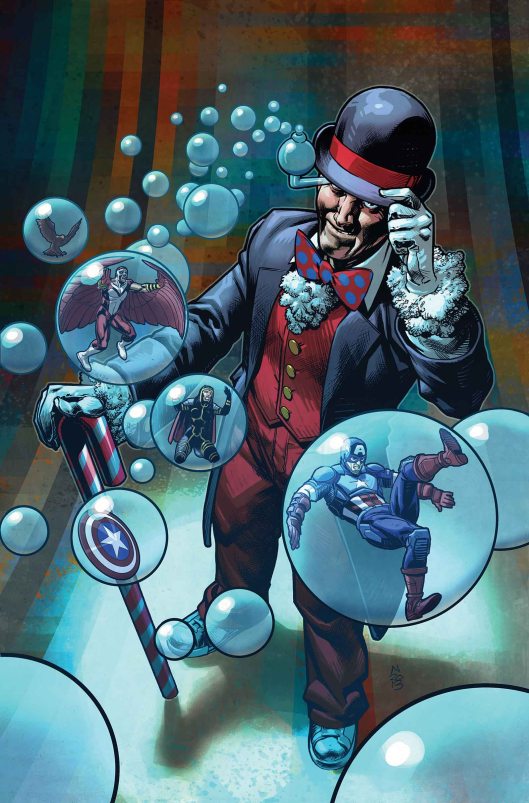 Yes, it was just as bad as you might imagine. On with the show!

Originally posted on 8/15/14.
I had a fun conversation with David (you know that guy) and Pedro (the Jarobi of FBB4L) the other day about Captain America. Captain America stories have always served as something of a fun house mirror reflection of the political era in which they are published. I expressed a desire for a version of Captain America that captured the spirit of the seventies and the legacy of Richard Nixon, the President who defined that era.

Why Captain America? As you probably know, the character’s a superhero created by Jack Kirby and Joe Simon in the 1940’s as a wartime hero and reintroduced by Kirby and Stan Lee in the 1960’s as a man out of time (he was trapped in suspended animation during the war and thawed twenty years later). The ‘man out of time’ premise allowed Kirby and Lee to keep the character young, but more importantly, it helped them maintain the idea that the ’60’s represented a new dawn of superheroes in the Marvel superhero narrative while building a link with the superhero comics published by Marvel/Timely during the war. After all, if Captain America was active in the Marvel Universe during the ’50’s, it might make the emergence of the Fantastic Four and the Avengers a little bit less special. The only problem, of course, was that Marvel published Captain America comics during the ’50’s. Instead of simply ignoring those stories, Steve Englehart and Sal Buscema had the inspired idea of creating a second Captain America who took the place of the original during the early days of the Cold War.

Just as the first Captain America served as commentary on the Greatest Generation and our values during the Second World War, the ’50’s Cap reflected the paranoia and anti-communist fear of his era. 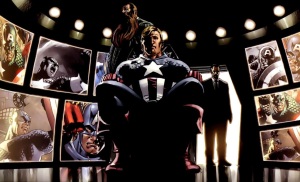 It was a neat idea that Tom Gordon and Mark Gruenwald revisited with the character of John Walker, an artificially enhanced, emotionally unstable soldier who replaced Steve in the 1980’s, and David Mazzucchelli and Frank Miller explored with Nuke, the crazed super soldier introduced in their brief Born Again arc in Daredevil. Although both seem pretty similar, there are some clear differences. Gordon and Gruenwald’s Walker started as a corporate sponsored ‘hero’ with ties to the criminal underworld (as SuperPatriot) and became a comment on the aggressive strain of patriotism favored by many political conservatives of that era as Captain America. I’m not sure if this was intentional, but Gruenwald infused Walker with the kind of amoral emptiness embodied by figures like Ollie North (during the Iran Contra era, before he became a conservative gadfly).

Gruenwald gave Walker the aggressiveness and thirst for revenge and action that we associate with elements of the conservative movement without the ideology. He criticized the original Captain America for being insufficiently proactive, but never clearly articulated the goals he wanted to achieve. This may have been to avoid angering conservative readers, but it inadvertently captured something essential about a subgroup of Reagan Republicans who were primarily attracted to his optimistic and aggressive style and thought little about his ideology.

Miller and Mazzucchelli’s Nuke was another unstable super soldier who spouted nonsense dialogue, but he was intended to be a Rambo style cautionary tale combined with a commentary on the military industrial complex. 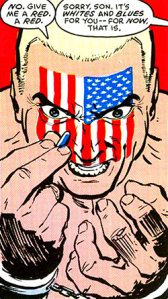 Nuke was the perfect American hero for an era of dirty wars and unofficial police actions in developing nations. A man manipulated into committing atrocities for the ‘public good’ and private profit. These Reagan era Cap analogues failed to capture the genuine (if misplaced) sense of optimism and hope in that period, the idea that it was ‘morning in America’, but captured something essential about that era. There have been other Captain Americas for other eras, like the anti-Cap created by Chris Priest and Bart Sears (a comment on the post 9/11 security state) and the Bucky Cap introduced by Ed Brubaker and Steve Epting in the aughts. 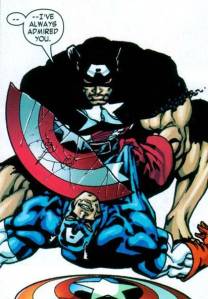 Jason Aaron and John Romita jr. recently introduced a 1960’s Cap-like super soldier and Marvel announced that Aaron and Stuart Immonen were planning to have Falcon replace Captain America for some period of time, but since I’m following his run on Marvel Comics Unlimited, it’ll be a few months before I read their approach to the ’60’s character or the new Captain America (or as I like to call him, the ‘real’ Captain America).

So what would a Cap of the seventies look like? In 1972, Esquire asked Bernie Wrightson, Jeff Jones, Mike Ploog, Barry Windsor Smith, Ralph Reese and Alan Weiss to create a generation of heroes for the seventies, with very interesting results. 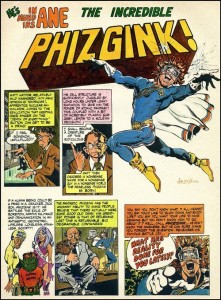 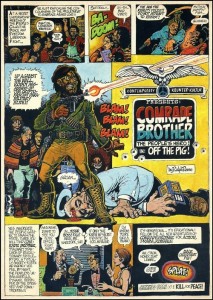 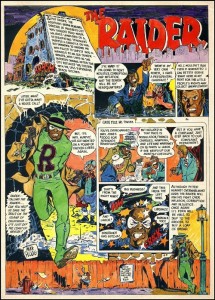 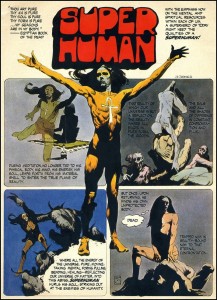 via John (Ungoliantschilde). I’ve always wanted to see a version of Captain America who embodies the Nixonian 1970’s – a Nixonland Cap for a corrupt era. I think we’ve seen Marvel characters who were created as responses to that era (Punisher, Nuke and other Vietnam Vet characters), but I’d like to see one that reminded readers of the paranoid, disgraced Nixon administration in all it’s toxic glory. A reactionary who stands for the ‘quiet majority’ and symbolizes the resentments of some elements of the white middle class in the late ’60’s – ’70’s. There are some super villain groups that touch upon this idea (the Sons of the Serpent and the Secret Empire come to mind) but none that fully capture the impact of the post 60s counterrevolution. I think the closest may have been a character from Larry Hama’s work on GI Joe, the Hasbro property licensed to Marvel Comics. Yes, the closest thing to a Nixonland Captain America is the Cobra Commander!

Hama’s Commander was the disillusioned brother of a Vietnam War veteran who lost faith in his country, who believed that the system was designed to beat the little guy.

In Hama’s first version of the character, the Commander built Cobra in middle America by exploiting the anger and fear of resentful middle class Americans who felt like outsiders in their own country. In some weird way, he was their Nixon, someone who tapped into their sense that snobby elites (who didn’t really know better) had taken their country away from them. I’d love to see a figure like Captain Nixonland presented in a heroic (or at least vaguely sympathetic) light in a contemporary superhero book for silly and serious reasons. Pop culture helps shape our perception and collective memory of important moments and eras. A Captain Nixonland can remind us that Nixon’s legacy was more than the twin embarrassments of Watergate and Vietnam, that he laid the foundation for the modern Republican Party. I also think that the blend of political history and heightened superhero adventure narratives would be hilarious, especially if done right. It would also be pretty amusing if it was done badly.