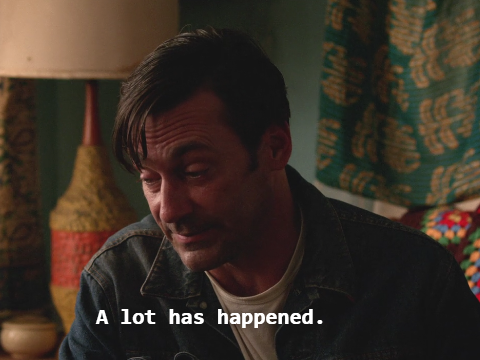 The last year has been busy, so no time for blogging (most nights, I have a few minutes to write before I get too tired). The last month has been challenging, but it’s critical to focus on what can be done to mitigate harm and preserve rights for the most vulnerable among us over the coming years.

It’s easy to say and write that, but man, is it hard to follow that advice in practice. The period between the election and the inauguration has felt like a dramatic pause in a horror movie. We have solved the Lament Configuration. We opened it and they came.

We will have to be our own Kristie.

Those of you who follow the Funnybook Babylon tumblr page (the Constantinople to the main site’s Rome) may have seen a link to a wonderful essay by Elana Levin of the Daily Beast exploring the similarities between some of the figures in Jack Kirby’s Fourth World (a sprawling mini-universe created for DC Comics in the 1970’s) and the ascendant elements of the American conservative movement. She focuses on Glorious Godfrey, a quasi-evangelist figure who serves as the propagandist for Darkseid, Kirby’s god of fascist autocrats. If you’re not familiar with Darkseid, there are some great stories you can read (or see), but that will have to wait for another day.

In her response to the Funnybook Babylon tumblr post, Elana referenced the Action Network as a place to start if current events have inspired you to become an activist (and it should have – go out in the world and make a difference!). You can check them out here. The Roots’ Okayplayer website also linked a great list of volunteer/donation opportunities for people who want to get involved. If you’re not interested in either, do some self reflection to identify the issues that are closest to your heart, identify some folk in your area doing the work and join in. These may be sad times, but we all have work to do.

Anyway. That’s not why I’m here. I’m here to share a list of the things I’ve done to cope and process over the last month. Let me know what you think or if you have any additional suggestions.

WTF with Marc Maron – for the authenticity and the brilliant interviews. I get the sense that the time he spent processing and grappling with trauma and anger in public over the last few years made him one of the perfect figures to listen to during the beginning of the Trump era. Highlights:

Filmspotting – for a deeply humanist approach to film criticism.  Adam Kempanaar and his successive series of co-hosts (Sam Van Halgren, Matt Robinson and Josh Larsen) have produced the most consistently entertaining podcast of the ‘podcast’ era. The focus is on film, but the moments when the two talk about the world beyond pop culture are powerful. Highlights:

Jay & Miles X-Plain the X-Men – for a thoughtful and entertaining exploration of my favorite childhood comic book. Jay Rachel Edidin and Miles Stokes combine scholarly intensity with the passion of an enthusiast to unpack issues of the Uncanny X-Men, the New Mutants, X-Factor and Excalibur. Sometimes they explain why Madelyne Pryor is one of the most complex and compelling antagonists in the X-narrative or write songs about the Summers family tree (for lyrics click here). On other occasions, they explore the sexual politics of Alan Davis and Chris Claremont’s Excalibur or the appropriation nightmare that is post-Jim Lee British woman in a Japanese woman’s body Psylocke. They also do inspired readings of scenes (the ones featuring Boom Boom and the ominous Claremont narrator are the best). If FBB was a going concern, I hope that we would’ve evolved into something like this. Highlights:

iFanboy Pick of the Week Podcast – for a sense of certainty in an uncertain world. This is the ur-comics review show.  Josh Flanagan, Conor Kilpatrick and Ron Richards have a structured conversation about the new comic books they picked up during the prior Wednesday every single week (they’re up to 565 episodes). If you’re not a comics person, here’s a primer – most serialized comics from American publishers are made available in stores and digital storefronts on Wednesdays. One of the trio (they rotate) select their favorite issue of a comic book published that week (the ‘book of the week’) and they discuss for about ten minutes. This review is followed by a series of mini reviews/recaps of other comics the three purchased that week. They close out the show by answering listener questions. Sometimes the episodes come close to great, but they’re always satisfying, even if I’m unfamiliar with the comics discussed that week (which is becoming more and more frequent). Highlights:

Dunc’d On – because I used to be a person who watched basketball on a regular basis. I am no longer that person, but I still love basketball. I still watch clips (and the occasional game) and read the impassioned blog posts, but only listening to Nate Duncan’s podcast reminds me of what it’s like to feel immersed in basketball. Duncan analyzes the sport and business of professional basketball. He doesn’t obsess over outsized personalities or embrace facile narratives. He just delivers information in an oddly comforting near-monotone (when he’s not reading ad copy for bizarrely fascinating sponsors like Naked, the producer of the world’s first home body scanner). Highlights:

Conversations with Tyler – for the probing conversations between an intensely curious libertarian economist and an influential figure. I’ve enjoyed reading (and frequently disagreeing with) his writing on the Marginal Revolution blog for many years, but never appreciated his strengths as an interviewer until listening to this series of conversations. Come for the conversations with Ezra Klein, Fuchsia Dunlop and Jeffrey Sachs. Stay for comments like “I’d put a book on the table, I’d point at it, I’d say ‘You’re not ready for this yet’ and then I’d just walk away, and that was fairly effective” in a conversation on  introducing children to reading. Highlights:

KCRW’s The Treatment – for the best interviews with people in the entertainment industry. Elvis Mitchell is special for lots of reasons – his probing analysis, his cool speaking voice, his charmingly corny jokes before commercial breaks – but his show’s on this list because of the way that Elvis treats everyone he interviews like they’re special, the only person in the room. I listen to a lot of podcasts that cover the American culture industries, but very few hosts/interviewers are as relentlessly focused on the interviewee as an artist (rather than as a cog in a endlessly churning corporate culture machine). Highlights:

The Next Picture Show – for the reminder that the present is informed by the past and that the best film criticism explores the larger context of an individual work. Every two weeks, Keith Phipps, Tasha Robinson, Scott Tobias and Genevieve Koski (the former editorial team for the late, lamented Dissolve website) review a pair of films – a classic film and a thematically related modern successor. The quartet do a great job of unpacking the themes, visual storytelling choices and performances of the individual film, but the broader conversations about genre, trends in Hollywood and culture are what sets them apart from everyone else. Highlights:

The Ezra Klein Show – for enlightening conversations with fascinating people. I’ve enjoyed Ezra’s writing since he blogged for Think Progress, but his podcast interviews with figures like Andrew Sullivan, Tom Perez, Trevor Noah, Heather McGhee and Ta-Nehisi Coates are truly thought provoking. One of the things that’s always distinguished Ezra from other interviewers is that you get the sense that he’s not just conducting the interview for the audience’s benefit. He wants to gain a better understanding of the topic that the interviewee specializes in or learn more about the interviewee’s perspective on the world. These conversations are a part of a personal and professional learning process. Ezra’s commitment to self-directed learning shapes the questions he asks and raises the stakes of the interview. When he talks to Arianna Huffington about her ’sleep deprivation crisis’ concerns or Ta-Nehisi Coates’ commitment to personal stability, it feels personal. He’s not just getting a response for the benefit of an imagined audience, he really cares about the answer. This level of intellectual engagement comes across in the audio format – it makes me feel like I’m in a micro seminar. Highlights:

A Seat at the Table – Solange

Remember Us to Life – Regina Spektor

1 thought on “Cell Therapy (Or am i born to lose or is this just a lesson?)”