Baz Luhrmann’s films are often disparaged as celebrations of empty excess, but I’ve always thought he was a genius at using spectacle to inspire empathy for characters living in unfamiliar worlds.

His films are loud, unsubtle and tasteless. They take place in garish, beautifully designed worlds that bear no resemblance to reality and feature theatrical performances and almost comically unsubtle directing. They also do a better job of capturing the emotional truth of the source material than most adaptations of classic material. Luhrmann’s adaptation of the Great Gatsby is not good – a number of the techniques that felt innovative in earlier movies felt like hoary cliches and he was far too reliant on digital special effects – but he still did a better job of giving the audience insight into the fears, beliefs and desires of the characters than previous adaptations of the Fitzgerald original.

Some of this success can be attributed to the performances. Leonardo DiCaprio’s Gatsby is a perfect blend of Jack Kennedy and Frank Abagnale, and Carey Mulligan turns Daisy Buchanan from an elegant cipher into a tragic reminder of the limited choices upper class women had in the Jazz Age.

Joel Edgerton effectively captures the pitiful, callous cruelty of Tom Buchannan. I was pleasantly surprised by Maguire’s performance. This was the first time I’ve liked him since Wonder Boys. He managed to convey Nick Carraway’s passivity without becoming entirely inert (which was a real problem with Sam Waterston’s depiction in Jack Clayton’s 1974 adaptation).

It’s the way that Gatsby’s perfectly tailored suits look like elegant couture at the first party and like a costume when he meets Daisy for a rendezvous at Nick’s house or how Luhrmann uses music, light and sound to evoke the feeling of going too far at your first party and realizing that what appeared wild and anarchic is pretty tame by the light of day.

In some ways, Luhrmann was a perfect choice as a director to adapt Gatsby. The sketchy, archetypal quality to the characters in Fitzgerald’s novel complement Luhrmann’s ongoing effort to use seemingly superficial things – style, music, movement – to suggest deeper truths in his films. Unfortunately, this message is undermined by all of the directorial tics and indulgent tendencies that he’s developed over the years.

In Luhrmann’s earlier movies, the fanciful sets helped create the sense that the viewer was in a heightened fantasy world, but in Gatsby, his computer generated New York was a distraction that robbed meaning from almost every emotionally honest moment, with the notable exception of the last confrontation between Gatsby and Tom Buchannan. It felt like the actors were performing in a Roaring Twenties video game.

There isn’t much difference between Luhrmann’s approach in Gatsby and in Moulin Rouge or Romeo + Juliet. He’s always embraced artifice and smothered performances with bombast and spectacle.

So why does Gatsby feel so unsatisfying? I think the answer lies in the difference between practical effects used in the earlier films and computer generated effects in Gatsby. There was a charm to the ornate handcrafted sets and practical effects that were lacking in Gatsby. It helped root the spectacle in a recognizable world.

Although the computer generated effects in Gatsby were an amazing technical achievement, they were also a bit mundane. Luhrmann’s impossibly perfect fantasy version of New York is the one that exists in the mind’s eye of anyone vaguely familiar with the Jazz Age. It lacks a personal touch, the idiosyncratic flair that we’ve come to associate with Baz Luhrmann movies. I also can’t help but feel like a story that’s essentially a critique of fantasy and deluded love is undermined by an idealized Jazz Age New York. 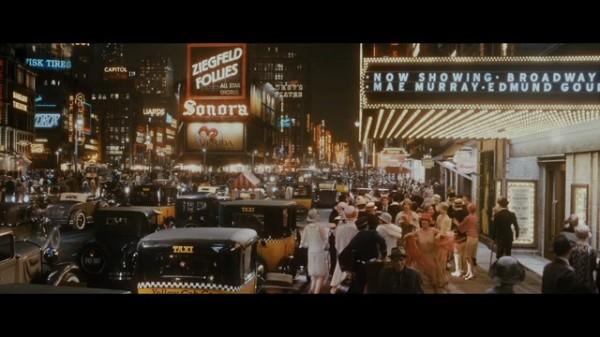 All of the familiar elements of Baz Luhrmann films are here – the migraine inducing quick cuts, the ornate sets, the inappropriate music choices – but where they once felt provocative and daring in earlier films, in Gatsby they were dull and predictable. Even the more interesting Luhrmann touches were underwhelming. The dance sequences were well orchestrated, but lacked the thrill of Moulin Rouge.

The hip-hop tinged modern soundtrack was a cute idea, but the execution was lacking – every time I heard Jay-Z, I was pulled right out of the narrative.

Is hip-hop in the 21st century the equivalent of jazz in the 1920’s? I think one can argue that it was a visceral and culturally exciting music in the eighties and nineties, but I’m not sure that it plays that role in our culture anymore. Jay-Z is an institution. He’s the status quo. Jay might’ve been a daring choice for a 1998 version of this film, but this is 2013. Jay’s the guy who represents ball players and used to own a piece of the Not-New Jersey Nets. Am I the only one who suspects that a real teenager would scoff at the idea that hip-hop is the cutting edge, hip young music of the future?

It’s a shame that Gatsby doesn’t work, because it’s clear that Luhrmann gets the class conflict at the core of the original novel. He never lets the viewer forget about the ocean of privilege between Nick and Gatsby or between Gatsby and the Buchanans. Luhrmann evokes the racial tension hinted at in the novel by including African American faces at key moments in the narrative. When Tom rambles about the primacy of western civilization, or parties with his mistress in a Manhattan hotel room, or when Gatsby is driving Nick to the city and spinning a desperate web of lies, Luhrmann makes sure that we see a black face (or several) at some point in the scene. He reminds me of the untold side of most narratives set in this era, of the people who were only heard when they were singing or playing music on a stage. The only problem is that Luhrmann shows too much of the joy and none of the pain. There was something a little bit too joyous and celebratory about the tenants at the tenement across the street from Tom’s illicit meeting place or the passengers in the car that passes Nick and Gatsby on the bridge has too many bottles of Moët. The latter scene is directly from the book, where Fitzgerald writes:

“As we crossed Blackwell’s Island, a limousine passed us, driven by a white chauffeur, in which sat three modish Negroes, two bucks and a girl. I laughed aloud as the yolks of their eyeballs rolled toward us in haughty rivalry.

‘Anything can happen now that we’ve slid over this bridge,’ I thought; ‘anything at all…Even Gatsby could happen, without any particular wonder.”

Luhrmann does a nice job with the visuals. Three people of color, two male, one female, all of whom are stylishly dressed and chaffeured by a white man (imagine the scandal!). He misses Nick’s ambivalence about class mobility (which is made more vivid when it intersects with race), the familiar discomfort that established classes have with the consumption patterns of the nouveau riche (or the nouveau middle class). Without the mocking laughter and class conflict, the moment becomes ahistorical and meaningless.

I didn’t think that Luhrmann would capture the nuance or lyricism of Fitzgerald’s novel, but I assumed that he would find a way to use his uniquely bombastic brand of melodrama to evoke the central themes of the book. Luhrmann fulfilled those expectations, but was undermined by his failure to evolve as a filmmaker. The interesting moments were drowned out by the stale ones. But I still have a soft spot for Luhrmann films. The bombast, spectacle and visual candy with a touch of camp. I hope that he finds a way to combine that zaniness with more forward thinking ideas in his future projects.